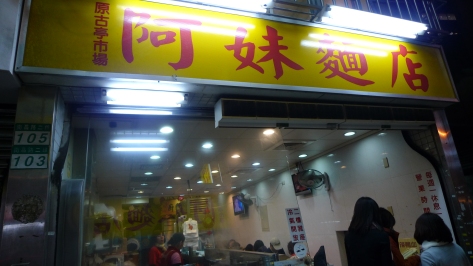 I love good cheap noodles, even better I like it when it’s close to my house, A-Mei’s Noodle Shop is all three of these things. They have a few different types of noodles here with about 10 different ways to have them. So far I’ve only tried the yi mian with wontons (餛飩意麵), yi mian with lean pork (瘦肉意麵), and rice noodles with wontons (餛飩細米麵), all of which are really good. This place seems to be very popular because it’s always full and they run out of things quickly. We usually go for dinner, but on several occasions they’ve been out of what we wanted (usually the lean pork/瘦肉 and the oil tofu/油豆腐). So I would recommend going earlier rather than later for optimal choice selection.

I love the lean pork. It’s probably some of the most tender pork I’ve ever had, like ever. The broth is really good too with really good flavor, not to salty or oily. It looks like a pork stock with dry onion and garlic (maybe). Whatever it is, it’s really good. The noodles are also very good, not soggy or too hard. If you get to-go they separate the soup from the noodles so that it doesn’t get soggy. I love that they put cilantro on top of the noodles as well and bean sprouts too. Very tasty.

Dan usually likes to get the tofu, but they had already sold out for the night, so instead we got the pork roll. I have no idea why the Chinese for this is chicken roll, but it’s pork. I liked this, although it was a little sweeter than I prefer. This one also had shrimp inside which was tasty. Overall this was good, not great, not sure if I’d get it again.

Other things I’ve had here are the rice noodles with wontons (餛飩細米粉) which was also very good.

Winter in Taipei can be cold, so for a good cheap hot meal, A-Mei’s is a good choice.

the stinkier the better.

- taiwanese-born, southern california-raised
- b.a. in history and chinese from the university of california, santa barbara
- currently in taipei, taiwan, making a living as a journalist

want to see what i'm eating? follow me on foodspotting!

[why hearts? because i didn't want to use stars and my options were limited -_-]

i have been visited by